In the wake of the success of the Twilight series, numerous authors and publishing houses have rushed to release their own vampire related stories, or what I sometimes like to call ‘Twilight Spawn’. At the same time, vampire tales that actually pre-date Twilight (such as Anita Blake: Vampire Hunter, the Southern Vampire Mysteries or True Blood and The Vampire Diaries) have also been ‘discovered’ by new readers.

One such ‘Twilight Spawn’ is the Vampire Academy series by Richelle Mead.

With the seventh and final volume, Last Sacrifice, having just been released on December 8th and the film rights to the first book being optioned (don’t expect to see anything for 2-3 years however), I decided to sit down and read the first volume.

Man, was I surprised!

Yes, much like Twilight, these books are written with the teenage audience (and more specifically, teenage girls) in mind. There is romance, teen angst, all the stuff you might expect from a book like this, but what surprised me was Mead’s mythology, the world she has created for her stories.

Her vampires are different from the ‘traditional’ vampire, but not in the ‘sparkle in the daylight’ of Meyer’s books. In Mead’s world, there are three distinct vampire species. First of all, there are the Moroi. These are the ‘pure blood’ vampires. They require blood to survive and have mystical powers tied to the four elements (earth, air, fire, water), but they can go out in daylight and are mortal. They also reproduce exactly like regular humans (no bite a person to turn them).

Second are the Dhampir or half-blood vampires. These are the result of a union between human and Moroi. They have the vast strength and speed normally associated with vampires, do not require blood and can only reproduce with a Moroi. For this reason (among others) Dhampir serve as protectors or Guardians for the Moroi royal houses.

Finally, there are the Strigoi and it is with here that we find the most ‘traditional’ vampires. Strigoi are the immortal, undead vampires, created when either a Moroi kills while feeding or by infection when a Strigoi bites a Moroi. Strigoi cannot go out in the daylight, are will not die of old age, can only be killed by stake, beheading or fire and are stronger and faster than even a Dhampir. They do lose their element-based powers when they are turned, however.

The stories focus on Vasilisa “Lissa” Dragomir (a Moroi princess and last of her line) and her best friend/Guardian in training Rosemarie “Rose” Hathaway (a Dhampir) and the trials they face both at the Vampire Academy and in the world at large ,as the Strigoi are slowly wiping out the Moroi.

These books are a surprisingly good read that I would recommend to anyone looking for another vampire series to sink their teeth into.

While we are holding a  two day event about the love of reading, the Readers’ Festival has a visual element as well. As part of the Readers’ Festival we ran a graphic design competition. Children, youth and class groups were invited to redesign a book cover and go in the running for book and art vouchers and other prizes.

Winners in each age category will be presented with their prizes tonight, Friday 6 August, by Mayor Miriam Smith, at the official launch of the Readers’ Festival.  Anyone is welcome to attend the launch, with booksellers and publishers here from 5pm and official proceedings from 6 – 6.30pm.

All entries into the book cover redesign competition are now on display, and will be available for viewing until Thursday 12 August. Including new covers for Possum Magic, The Lion, the Witch and The Wardrobe and Tomorrow When the War Began, among other titles,  there are some great skills and creativity on show.

Winning designs on display in the Relaxed Reading Area

…with Stephenie Meyer’s much anticipated Twilight series novella, The Short Second Life of Bree Tanner. Scheduled for release on June 5, this short book tells the story of Bree Tanner, introduced in the third Twilight book, Eclipse. With the upcoming release of the film version of Eclipse, it is rumoured that the character of Bree will player a larger role than in the original book and the author felt the need to provide a little more insight into this character. No doubt Stephenie Meyer fans will thirst for more (pardon the pun) and the success of the new story may spawn the author’s interest in completing Midnight Sun, her alternative version of Twilight from Edward’s point of view.

Have you noticed how many popular novels are being made into films this year? Angels and Demons, based on Dan Brown’s popular Robert Langdon series started the year off with a blockbuster film from a bestseller book.  Oddly enough the book is set prior to the events is The Da Vinci Code, but the film is made as a sequel.

If thrillers weren’t your thing, ever popular Jodi Picoult had her first novel to film treatment with My Sister’s Keeper just a few months back.  Shortly after, Sophie Kinsella’s Confessions of a Shopaholic also came to the screen starring Australia’s Isla Fisher. This film was a reasonable box office success, but panned by the critics. Audrey Niffennegger’s The Time Traveler’s Wife has just been released starring another Aussie, Eric Bana, and whilst we are on the Aussie theme, Maurice Sendak’s timeless children’s classic, Where the Wild Things Are which was filmed in and around Melbourne will be released next month. Most of this feature was actually filmed in 2005 but has been in what they call ‘development hell’ until this year.

If Graphic Novels are your thing, the very popular Will Eisner series The Spirit was released as a film this year, but has unfortunately been tagged one of worst films of 2009. 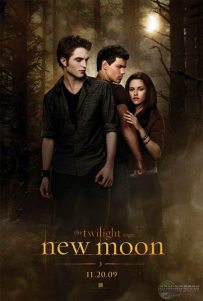 Dickens’ classic, A Christmas Carol has had a CGI re-imagining, released just in time for Christmas and to rave reviews. But possibly the most highly anticipated book-to-film event this year is the Twilight sequel, New Moon which was released today across Australia!

There’s plenty I’ve missed, tell us what others you have enjoyed this year or are looking forward to being released in 2010?

Which do you think was better, the book or the film? If you haven’t yet read the book, come to the library, grab a copy and make up your own mind which was better.

Finished Stephenie Meyer’s Twilight saga? Hungry for more in the same vein? The Library has numerous vampire and supernatural-related books and graphic novels for you to sink your teeth into.

You can find all these titles (and more!) by using the library catalogue. Happy reading!