Austin was recently here with us for a week’s work experience at the library. He is a passionate gamer, and has written a review about a new release PC game, Undertale. 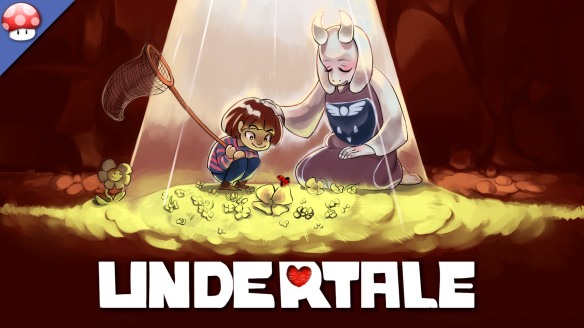 What is Undertale? You may ask, why do I hold it in such high regard? These are just two of the many questions you may be thinking of right now as you read my blog post about this absolutely fantastic video game.

Undertale is a RPG (Role Playing Game) for the PC which is almost entirely made by one person, a guy by the name of Toby Fox. A major selling point of Undertale is its tagline which is ‘The friendly RPG where nobody has to die’.

This is a major selling point of the game, because in most RPGs you strike down enemies with no care whatsoever, as who you are fighting is evil. Undertale on the other hand, gives all of its enemies such fantastic personalities through their dialogue and even their attacks against you.

Speaking of enemies, I’ll briefly talk about the battle system in Undertale. To start with, there’s an Attack menu, an Act menu, an Item menu, and a Mercy menu. I’ll be talking about the Act menu and the Mercy menu.

Where Undertale really shines the brightest is through its story, writing and humour. Undertale is best experienced without knowing much about its story, so I won’t go into details but I will say this so you know what you’re getting into.

A small child enters a cave in the mountains, trips and falls down an enormous hole. The child wakes up on a bed of flowers in a mysterious place.

A word of advice before thinking of purchasing the game would be that from screenshots of the game it can look quite ‘kiddy’ but don’t judge it on its looks – there are times where the game deals with some dark and sad themes.

To conclude, Undertale is an absolutely fantastic video game and I highly recommend you check it out at the very least, if you do not purchase it.

(Undertale is available for purchase on the Internet-based digital distribution platform Steam and undertale.com for $10).

This year the youth space in the library has seen some colourful changes including the addition of new coloured shelving, comfy cushions and couches, and snazzy study facilities. The final addition to this funky yet functional space is a painted mural that has been designed and produced exclusively by a team of artistic young people aged 13-19 years of age. Over a period of two months, the creative youth team has worked hard to create a visual representation of what they think reading is all about, and the finished product displays an eclectic mix of images symbolising the endless possibilities of the imagination. 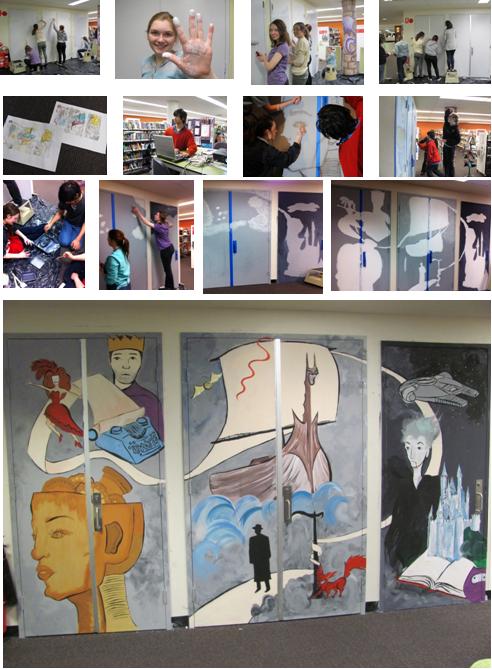 A big congratulations to the team for their efforts and an open invitation to all to visit the new youth space and check it out!

Are you 13 to 16 years of age?
Need a break from your parents these holidays?
Looking for something to do on Thursday night?
Want two hours where you can Facebook, Minecraft, Twitter, Google+, and surf the Web while munching on pizza, listening to music, and drinking soft drinks?
Do we have a deal for you! 🙂
These school holidays, after the Library closes on a Thursday night, we’re running Internet Lock-ins for 13-16 year olds from 7pm-9pm.
NO CHARGE – all you need is your Library membership card.
Bookings essential: 8397 7333
Tell your friends.

To be honest, until we were looking for ideas for the Dec/Jan holiday programme, I’d never heard of 3D Papercraft. And then another member of the CYS team showed me the book “We Are Paper Toys” by Louis Bou, which features the work of a wide variety of artists, designers and other creative minds using paper to create amazing and unique 3D toys/models from paper. 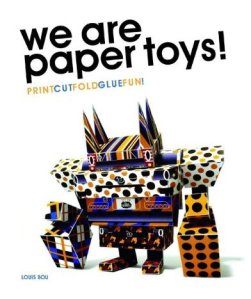 The book that gave us the idea...

Google 3D Papercraft and you’ll get approx. 1,350,000 results – including recreations of people’s heads from photo images, tugboat models, iconic computer game characters, buildings… the list goes on. It seemed like a perfect choice for a workshop aimed at 13-18 year olds.

Of course, this meant that now I got to play with paper myself in order to create the examples that would go up around the library as advertising for the workshop. And what an experience that has been!

First I found out the hard way that you really need to be working with at least a large A4 pattern… cos A5 is toooooo small. Also, ordinary paper is just too flimsy, poor little guy can barely stand up.

For something so small, he sure took a lot of time and effort...

Working on Max also reminded me to have glue on hand at all times… he’s held together with sticky tape for the most part and it just doesn’t look as good.

My next efforts were on a slightly larger scale… Undead George and Werewolf Michael Jackson.

More lessons on what not to do when playing with paper...

With Undead George I discovered that printing the pattern out in greys doesn’t look very good and colouring in with texta only mildly improves things.
However, he did teach me that the simpler patterns are definitely the easiest ones to work with. (Not really a big surprise, that one.) And that scoring the fold lines before you start trying to make the model does, in fact, make things much easier!

Werewolf Michael Jackson was a very good lesson in why you can’t use a glue stick to make these awesome toys/models – it just doesn’t work. The glue doesn’t hold things together and takes too long to dry… very frustrating when working with something as intricate as this pattern turned out to be. So sticky tape came to the rescue again… until craft glue stepped in and saved the day entirely.

This little bunny proved a challenge.

And finally, I took all the lessons that I learned from the previous three toys/models and had a go at “Nodder” …

and another simple pattern that creates this little guy: 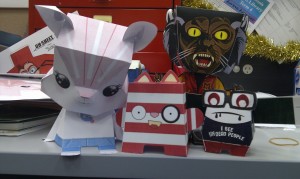 Come along to the workshop and see what you can make for yourself!

Craft glue may be fiddly and scoring fold lines may take time, but it is totally worth the time and effort for the end result.

So if you’re 13-18 and would like to have a go at making some 3D Papercraft models/toys of your own, we would love to see you at the workshop on January 20 from 3pm-4pm!
Make your bookings via the library.
All the equipment and 3D Papercraft patterns will be supplied.

With all competition entries, posters need to be A3 in size. Age categories for entrants are split into two groups, 13-17 or 18-25 years of age. Winning entries will receive $100 of book and art vouchers and your poster will be used for future promotional purposes. In addition, winning entries will be displayed at the Reader’s Festival. Winners will be announced on the 6th of August, 2010.

Entries close soon, so don’t miss out! You can pick up your entry forms in front of the City of Tea Tree Gully Library Information Desk or in the Teen Area of the library. Please return your forms to the City of Tea Tree Gully Library by the 30th of July. Winning entries will be announces on the 6th of August, 2010 and displayed at the Reader’s Festival. The competition is on,  so get ready, get set, and get creative!