Here are some books our staff members have been enjoying lately. There’s a bit of everything – fantasy novels, cookbooks and revisiting classic children’s books to name a few! 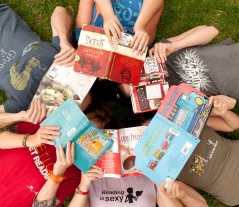 Born to Darkness by Suzanne Brockmann

Following the Equator by Mark Twain

Winter on the farm by Matthew Evans

I’ve got your number by Sophie Kinsella

Cancer is a b***h ; or, I’d rather be having a midlife crisis by Gail Konop Baker

A dance with dragons by George R. R. Martin

Harry Potter and the Philosopher’s Stone by J. K. Rowling

The Rules of Inheritance: a memoir by Claire Bidwell Smith

Click the titles to find them on the catalogue and place a hold, or try using one of our online resources to find something great to read.

Megan recently read a book in the Phryne Fisher series called Ruddy Gore, written by Kerry Greenwood. She says, “technically I didn’t read Ruddy Gore, rather I listened to the book read on CD. I enjoyed listening to Phryne, an elegant and sassy sleuth, investigate a murder mystery in racy 1920s Melbourne.”

Sonya says, “I am reading Homer’s Odyssey by Gwen Cooper – not the Greek epic but the tale of a cat that was adopted as a kitten, and had both eyes removed and stitched up at 3 weeks old. He was going to be put down but a kind lady adopted him.”

David recently re-read Graham Greene’s Brighton Rock, just in time for a new film adaption. “Genius! Greene is one of my favourite authors and this is my favourite of his books. The book’s heroine, Ida, is in my opinion one of the strongest and most admirable female characters in twentieth century literature. Nail–biting in its suspense, I won’t ruin it by saying anything more about it.”

Suzanne has just finished reading Ash Rain by Corrie Hosking. “My book group were reading stories set in Australia, and I found Ash Rain quite by chance and it was set in the Adelaide Hills. It tells the story of a family made up of a single mother with her little girl and her female friend whose house they live in. All of the characters need to find out what is important to them and learn to speak their truth. Ash Rain is an engaging story, which although quite short (just over 200 pages) had me enthralled right until the last page.”

What are you reading at the moment? Tell us by leaving a comment!