Traditionally the busiest day in cinema, Boxing Day usually features releases of some of the year’s most anticipated films. This year continues the institution with at least seven releases slated for the day. 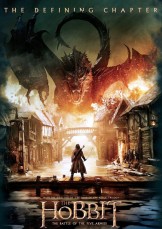 Probably the most anticipated is the final (for now?) Middle Earth based films, with the third of the Hobbit trilogy The Hobbit: The Battle of Five Armies. Starting with the second film’s cliffhanger of Smaug the Dragon’s awakening and vengeance upon Laketown, and of course, as the title states, it culminates with the infamous battle of five armies at the base of Erebor. Fans of the book are divided over director Peter Jackson’s significant additions and deviations from the original text, however given how popular the films have been, I expect that most are pretty forgiving!

Big Hero 6 is a Disney animated film, inspired by the Marvel comic of the same name. A Disney animated film, this one is expected to be popular with children and adults alike. Featuring a likable yet unlikely hero, in the form of homemade health robot, and follows his adventures with his creators siblings and friends.

The other films scheduled for Boxing day have no ties to books, however no doubt will keep the candy-bar busy include the next installment in the popular Night at the Museum franchise, Aussie film The Water Diviner and the British biography Mr Turner.

What films are you looking forward to seeing these holidays?
Don’t forget that the library has all of the most recent DVD releases and you can reserve your copy on our catalogue.