To answer these and other questions, NBN Co and the City of Tea Tree Gully invite you to attend an NBN Community Information Session: You and the NBN – getting ready and getting connected.

This is your opportunity to hear from NBN Co and Internet service providers on:

Bookings are essential. Book online through the links above or phone 8397 7333.

To answer these and other questions, NBN Co and the City of Tea Tree Gully invite you to attend an NBN Community Information Session: You and the NBN – getting ready and getting connected.

Are you tired of carrying and extra purse/wallet around just to contain all of your loyalty and borrower cards? If like me, you are a member of Stratco, Myer One, Jb Hifi, the Library, Video Ezy and a large range of other businesses and organisations, you can now store all of your cards on your smart device using this app. Card Holder is a free Android app that allows you to scan your card’s barcode and stores it in an easy-to find scrolling menu. It also lets you take an image of the front and back of your card, meaning you can store all of your loyalty and membership cards digitally and not need to carry them with you! Whenever you need a card, scroll the menu to the correct card, and the barcode will display. This digital barcode can be read by most modern barcode readers. Do you have a favourite app?
Want to find out more about apps? Try the links below, search the library catalogue or book online for an informative group session at the Modbury Digital Hub this month. 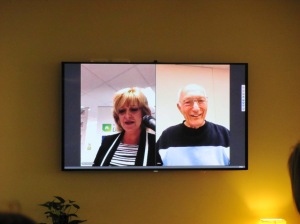 Mayor Miriam Smith guided the Modbury Hub launch, featuring a video provided by Digital Hub Coordinator Chris Campbell demonstrating the impact that the Digital Hub technologies and training program has had on the community. As one resident explained, he finds the sessions invaluable and ‘would have lost all of his hair’ if it wasn’t for Chris and his team of trainers.

Federal Member for Makin Tony Zappia also praised the new NBN rollout and how Digital Hubs are about increasing the digital literacy of the community.

Some of the new technologies were demonstrated via the split screen cross between the Mayor and Digital Hub volunteers on iPads, and between the trainers in different parts of the Library. The event concluded with some words from Coordinator Chris and a live stream from Charles Sturt where Federal Minister for Broadband, Communications and the Digital Economy,  Stephen Conroy officially launched the SA Digital Hubs.

Congratulations to the team, our volunteers, and also the community for the great asset the Digital Hub has already proven to be!

As you probably already know the National Broadband Network (NBN) is rolling out across Australia, and Modbury is scheduled to be connected this year.

The Library will be home to the Modbury Digital Hub to demonstrate the benefits of superior internet speeds provided by the NBN. We are already rolling out a range of excellent training programs on digital literacy which you can see on our website.

In preparation for installation of the Digital Hub, the Library is renovating our suite of PCs which will impact on their availability.  The Training Room will undergo further renovations and will be closed from March 4 until March 13 inclusive.

The rest of the PCs in the library will be unavailable from March 5 to March 13 inclusive.

We look forward to providing you with a new Digital Hub in coming weeks!

Bookings are now open for our Modbury Digital Hub training sessions in the Library. There are lots of  group and one on one sessions to choose from covering topics such as Facebook, online jobseeking, how to get savvy with your iPad, digital photos with Picasa, Internet basics, computing basics, how to get the best from Google, online shopping and more.
Come along to learn new skills and have some fun!
See our website for all the session details http://www.teatreegully.sa.gov.au/hubtraining or call us at the Library.  Bookings are essential for all sessions and can be made at the Library or by phone on (08) 8397 7333.

You may recall that we are becoming the Modbury Digital Hub in 2013 as part of the National Broadband Network roll out.

The first stage will be a revamp of the Training Room beginning tomorrow Thursday January 3. We’ll be taking out all of the PCs from this room and most of the furniture to make way for some building works and some new equipment.

You’ll still be able to book and use any of the other PCs in the Library. We anticipate we’ll be able to use the room again from January 28.