We are not alone

In celebration of 40 years since it first release on 16 November 1977, plans are in motion to remaster the iconic science fiction adventure film Close Encounters of the Third Kind and re-screen it in cinemas. It used to take some months for a film released overseas to reach Australia. Only selected cinemas had the right to show certain films, so audiences flocked to the Hoyts Regent cinemas in the Adelaide Arcade.

On page 16 of the Leader Messenger dated 5 July 1978, Tea Tree Plaza advertised a promotion designed to tie in Close Encounters of the Third Kind. To generate interest in the film, Tree Plaza hosted a display about UFOs, which was put together by the Australian Flying Saucer Research Society, in conjunction with Hoyts cinemas. This promotion also featured a special event, which was a talk by a member of the Society, with the incentive of winning free passes to see Close Encounters.

At this time, people were receptive to new cinematic science fiction experiences. Steven Spielberg had terrified and thrilled audiences with Jaws in Australia in 1975. Star Wars had been monumental – it had set the bar for special effects and excitement, when it was released in Australia in October 1977. Everybody was waiting for the next blockbuster movie. Sessions of Close Encounters of the Third Kind on evenings and weekends would book out in advance.

If you don’t know the story, Close Encounters of the Third Kind is focuses on a group of people who experience some sort of paranormal activity associated with alien contact.

Two parallel stories are told. Strange phenomena and sightings of UFOs are happening around the world, which according to a scale devised by UFO researcher Dr. Josef Allen Hynek, is a close encounter of the first kind. A team of scientists and experts including French scientist Claude Lacombe and his American interpreter and cartographer David Laughlin, are investigating these related incidents. For example, military planes which disappeared in 1945 have suddenly reappeared in the desert but without their pilots.

In Muncie, Indiana, in the USA, Roy Neary (played by Richard Dreyfuss) refuses to accept conventional explanations for his encounter with an unidentified flying object. After this close encounter of the second kind, he becomes obsessed with pursuing the truth. Single mother Jillian Guiler (played by Melinda Dillon) and her young son Barry have similar experiences.

Integral to the film’s plot is a musical sequence of five tones enabling humans and aliens to communicate. In India witnesses report that UFOs make these distinctive sounds. Both Roy and Jillian have repeated visions of a mountain and the five musical notes run through their minds. When the scientists broadcast the musical notes into space they receive a response, a series of numbers repeated over and over. Cartographer Laughlin, interprets this data as geographical coordinates, for the Devils Tower near Moorcroft, Wyoming.

Defying a cover-up and military action by the American government, all of these characters follow the clues they have been given to reach a site where they will have a close encounter of the third kind: contact. The film was groundbreaking in its depiction of aliens as peaceful beings who wish to get to know humanity, rather than trying to take over the Earth or eat us. After their cinema experience, people could look up in the sky and think that perhaps we were not alone. 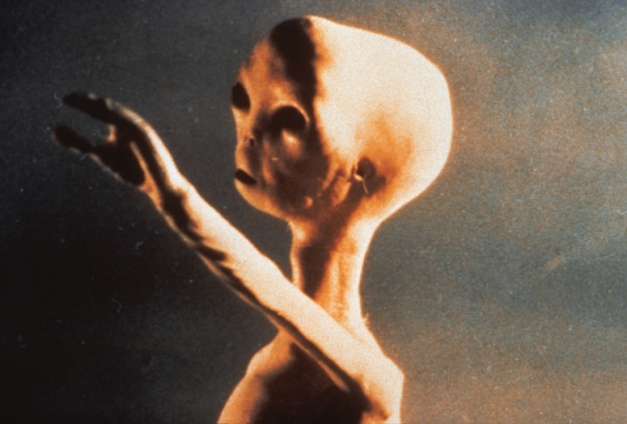 These were exciting times. Close Encounters of the Third Kind was a critical and financial success. It was nominated for several Academy Awards but the film only won one, for cinematography. It also won several other film industry awards. A disco adaption of the five note sequence charted as high as 13 on the US Billboard Hot 100 in March 1978.

John Williams would write many other beautiful, memorable film soundtracks and be arguably the best known composer of classical music in modern times. Steven Spielberg would direct a trove of acclaimed and popular films, and become the highest grossing director by worldwide box office ($9.246 billion) wikipedia.org. What would be the next science fiction/fantasy blockbuster? Superman released in 1978, which made a star of Christopher Reeves.