Former Tea Tree Gully Library staff member, Ben Crisp, has had a series he wrote turned into a webseries on ABC iview.

The series, called Goober, is a short form comedy documenting the life of Harry, an Uber driver on the autism spectrum. “Harry loves his life, he loves his job, and he loves his 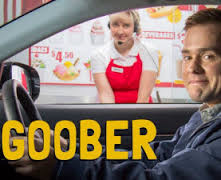 passengers: so much, that he wants every one of them to be his next best friend. Goober is a light-hearted comedy series about a man who sees the best in every situation, despite what everyone else sees. It demonstrates that first impressions don’t always tell the whole story: Harry seems unusual due to the way his autism shapes his interactions, but, more often than not, his candor and naivety expose the hypocrisy of the “everyday” people around him.”

We caught up with Ben to ask him about Goober and to keep in contact in case he turns into a full-fledged success who might be worth mooching off of in the future.

TTG Library:   Congratulations on Goober. The Library is incredibly proud to have one of our own produce such a great show.

TTG Library: Firstly is it pronounced Goober or Gūber?

Ben: Actually it’s spelt Goober but it’s pronounced Throatwobbler Mangrove. No, Harry the Uber-driver is definitely a “goober”: a loveable goofball who means well, but tends to get it wrong more than right.

TTG Library: Why isn’t it spelled Gūber then?

Ben: We considered it briefly, but thought that people might see the name and think it was a foreign-language show. Or misread it and think it was about the Gruber brothers, Hans and Simon Peter—you know, the bad guys from Die Hard 1 and 3. Actually that would be a pretty cool show too now that I think about it.

[we all think it would be a great show too, you could call it Now I Have a Gruber! – start writing]

TTG Library: In a lot of ways Gūber would have been funnier, do you now regret not spelling it that way?

Ben: We choose to listen to our fans, not our diacritics.

TTG Library: You are one of the Library’s favourite sons, how has the transition from library to screen writer been?

Ben: Libraries are hallowed ground for all writers, cathedrals built for stories, so working in a library was a special privilege. Particularly one with so many wonderful people on the team! And now I’m still just as lucky to be working with another amazing team of enthusiastic and dedicated people. Screenwriting is very different work, but hopefully serves the same essential purpose as library work: to deliver stories into people’s lives.

TTG Library: The series is both very funny and has a lot of heart and is often very poignant, where have you drawn inspiration from?

Ben: Lots of places! The initial spark came from the idea that it has become more and more common for people to have short, sometimes awkward, sometimes poignant interactions with strangers that only last the length of a trip in an Uber or a taxi. So we dreamt up a character who is a bit socially awkward, but works as a driver because he loves talking to people and trying to help them—even though he’s not always that good at it.

TTG Library: You manage to tell amazingly complete narratives in very short periods of time, was that difficult?

Ben: Part of the challenge with digital formats like ABC iview is engaging the audience in a short space of time. Some of it comes from the format: Harry gets life-coaching from his Dad over the phone, picks up his passengers and gets himself into mischief, then fumbles his way through a talk with Wendy, his crush who works at the drive-thru. I’m lucky to have a very talented and diligent team of collaborators in directors Brendon Skinner and Simon Williams, and producer Kirsty Stark—between us we whittle the story down to just what it needs to be. But we’ve only scratched the surface: there is plenty more to Harry’s story that we are just dying to share with everyone—enough to fill a whole television series!

TTG Library: Is it too late to change the spelling to Gūber?

Ben: Sure, why not? Remember how they renamed The Mighty Ducks as Champions? That wasn’t confusing at all.

TTG Library: Obviously the mentoring you received at the TTG Library, primarily from David and Holly, was instrumental to your success, how vital was it?: a) Incredibly vital b) More vital than can be expressed in English c) 100% vital d) All of the above.

TTG Library: What was the experience of seeing your written words turned into images on the screen like?

Ben: Amazing! We were so lucky to have such a fantastic cast. Our lead actor, Brendan Williams, is really what brings Harry and the show to life. He captures the loveable, dorky charm of the character with this textbook comic expressiveness that cracks me up. Ashton Malcolm as Wendy, the equally-gooberish drive-thru attendant, is just perfect. The whole cast is terrific: every episode has beautiful performances by the supporting cast who play the passengers, from a fretting bridal party to a grumpy grandmother, a nervous schoolboy, to a pair of loudmouth rappers. It’s awesome.

TTG Library: Shane “Kenny” Jacobson plays the voice of Harry’s Dad, did he suggest changing the spelling to Gūber?

Ben: If he did, we certainly would have listened to him! Shane is a legend, in comedy and drama, and he really knows his stuff. He understood the character straight away and had some great suggestions when he recorded the lines in the studio with Brendan. It’s a tough ask for an actor to deliver that emotion when he’s just a voice on a phone, but Shane knocked it out of the park. He captures it perfectly: Harry’s Dad is a regular bloke who loves and supports his son more than anything in the world. TTG Library: Thanks.

Catch Goober on ABC iview or through http://au.gooberseries.com/ We want to see more so if you love it too let ABC know.

I was passing the Ask Here Desk on Thursday and this was the picture that I saw: 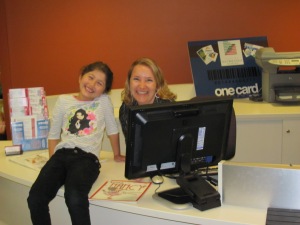 Mariam Yusoph has just had her 7th birthday and she is a regular at the library already.

She loves the library because she loves books (especially Fancy Nancy – which she likes “because it’s fancy”!). Like a lot of people, sometimes she finds the books she wants are hard to find on the shelves. When she can’t find something Mariam goes to the Ask Here Desk to ask for help.

She says that the people at the desk are always friendly and helpful. On this visit, Melaina helped her to put on hold some new Fancy Nancy books.

We hope you enjoy the books when they arrive Mariam! 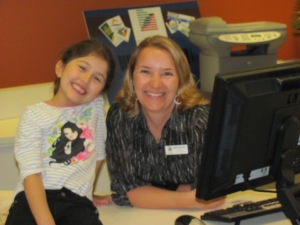 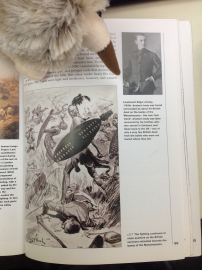 Anstey ponders the justness of the British invasion of Zululand while researching his namesake.

The Local History office recently fielded a question by a member of the Tea Tree Gully and Districts Historical Society. The Society had been contacted by a person in England who had a question relating to the tombstone of a Lieutenant Edgar Oliphant Anstey, who had died during the 1879 Zulu War. The Lieutenant was listed as having been born at Highercombe, South Australia.  I was able to confirm that Lt Edgar Anstey was the son of George Anstey, after whom both Anstey Hill and the Library’s mascot are named.

Edgar was born in Highercombe in 1851.  In 1873, he graduated from the Royal Military Academy at Sandhurst, and was commissioned a Lieutenant in the First Battalion, Twenty-fourth Regiment of Foot.

Edgar was a part of a British invasion force that had set up camp in Zulu territory near the Isandlwana Mountain. On 22 January 1879 an army of 24,000 Zulus had moved, undetected, into striking distance of the camp and attacked. The ensuing battle saw the British out-maneuvered and outnumbered by the Zulus. Over 1300 British soldiers were killed. It was the greatest defeat suffered by the British Army in the Victorian era.

Anstey led a fighting retreat from the plains beneath Isandlwana which was halted on the banks of the Manzimnyama River. Historian Ian Knight, in the book Isandlwana 1879: The great Zulu victory writes “With a steep drop … down into the river-bed below them, they could probably go no further; their only hope for survival lay as a group… And here, by the banks of the river, they were overrun – the true ‘last stand of the 24th’.”

Sources state that Edgar’s body was found by his brother, who was also serving in Zululand, and sent to England for burial.

Edgar’s death gives him the sad distinction of being the first South Australian to die as a soldier on active duty overseas, the first of a number that would swell during the twentieth century.

The Family History Volunteers have been counting down for the last couple of weeks but on Thursday the 9th of June (that’s D-Day+3 for those of us who are historically minded) the team cracked their 1000th customer for the 2010/11 financial year. 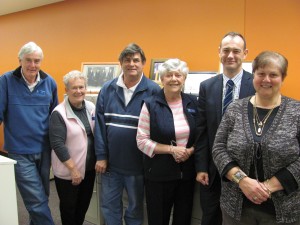 Tim Perkins of Para Hills was the lucky 1000th. Tim is a semi regular customer of the service and he was very pleased to receive his celebratory copies of Haystacks to Cul de Sacs and From Paddocks to Plaza!

Tim was introduced to us through a Family History Course put on by the Local History Service and his win was celebrated by the volunteers also.

While Tim was the winner, the volunteers did the hard work. A session with a Family History volunteer can often run for over an hour (conditions approving) which means that Local History tasks aside the Vollies here have achieved anywhere between 1000 and 5000 hours of successful service.

The Local History Service simply could not cope without them.

If you see Pam, Barbara, June, Helen, Lyn, Geoff or Faye please congratulate them on their milestone!