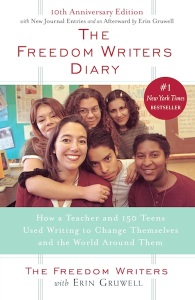 The Freedom Writers Dairy is a Number 1 New York Times Bestseller and it is easy to see why.

Written by teenagers during their four years of high school, it is easy to assume that it is like any other teen diary. It’s not. The entries are not named, but each is given a number. The diary entries show the lives of teenager who at the age of 14 or 15 have seen more dead bodies than a mortician. It tells of the life of a girl who was in a refugee camp, a boy who, when playing a game of Russian roulette, saw his friend shoot himself, a boy whose mother stood on the side of the road looking for food or money. Many of the teenagers who have shared their lives through the diaries have either been in jail or juvenile detention or know someone who has. Their English teacher, Erin Gruwell, or Mrs. G as she was called, has written her own diary entries which show her struggle to engage the “unteachable” students and then how she fought to keep them together for their junior and senior years.

This novel is not for the faint hearted. It discusses topics which many shy away from in a frank manner and it opens our eyes to the struggles of students and their young English teacher who are not dissimilar from ourselves who are trying to fit in. The best part of the novel perhaps are the ten new diary entries which show their lives after leaving the safe comfort of their room 203 and high school.  The Freedom Writers Diary, in my opinion, is a stellar novel which confronts us in ways that you wouldn’t expect and gives us the challenge of changing our own lives for the better. It is a must read for any teenager. 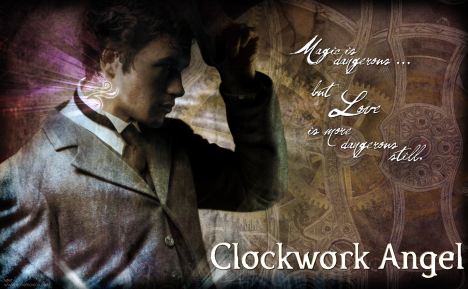 Clockwork Angel by Cassandra Clare is about a sixteen year old girl named Tessa Gray who travels to England, where something terrifying is waiting for her in London’s Downworld.  Tessa seeks refuge with the Shadowhunters who are a band of warriors dedicated to ridding the world of evil demons.  As she is drawn deeper into their world she finds herself torn between her two best friends and quickly realizes that love can be very dangerous.

Clockwork Angel was an extremely easy read and well written.  The characters are incredibly believable and it’s effortless to relate to what happened, what they did and how they dressed. The plot was interesting because there is a complicated romance between one girl and her two best friends. Another captivating aspect of this book is the diverse genres, romance mixed with supernatural creatures. Clockwork Angel is not purely about love and romance there are many dramatic and distressing twists and turns in the plot.

Overall, I could not fault the plot of Clockwork Angel. I quickly made a connection with the characters and plot early into the story. I really enjoyed this book because it included all of the aspects I enjoy in a good read – romance, supernatural creatures and a bit of drama. I would rate this book five out of five stars.

Reviewed by Jade, a member of the youth book club Cover2Cover.

The Summer Reading Club Finale starts at5pm on Wednesday 23 January, with special prizes and activities for SRC members. Come on the night dressed as one of your all-time favourite storybook characters and take part in a range of activities including a performance from Wobbles the Clown, a fancy dress parade and raffle draws.

Funky Fit Kids Yoga was a fun school holiday event at the Tea Tree Gully Library.
In the Community Learning Centre a group of excited children (and some excited parents) discovered the fun of jungle dancing, yoga poses, songs and games.
Children came on a journey through the jungle complete with lions, tall trees and lotus blossoms. 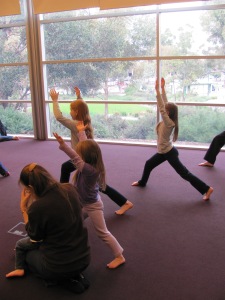 Yoga fun in the school holidays

Featuring many fun yoga poses and stories, the workshop was a celebration of strength, flexibility and self-confidence.

This year is the 100th anniversary of the sinking of RMS Titanic, a passenger liner that sank after hitting an iceberg. 1,513 people were killed in this tragedy on April 15, 1912.  The Titanic was the largest ship afloat at the time of her maiden voyage and she was proclaimed to be unsinkable.

If you’d like to know more about the sinking of the RMS Titanic, you might want to borrow one of our many books about the event. Click here to see the titles on our catalogue. 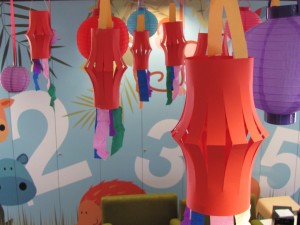 January 23rd will mark the start of the Year of the Dragon and here at the library we’re getting pretty excited about it. To get into the Chinese New Year spirit we’ve hung lots of lanterns and there might even be some dragons around over the next couple of weeks.

If you’re after some school holiday fun, why not come and help us celebrate the New Year with the Chinese New Year Storytime on Monday 16, Tuesday 17, and Friday 20 January from 10:15am to 11:00am. Join our Library family in a session of enchanting stories, songs, activities and rhymes. Create your own Chinese Lantern to take home.

Start the year with a roar and let your imagination run free! Join in the Design-a-Dragon Workshop and create your own colourful dragon to take home. The workshop is on Wednesday 11 January from 10:30am to 11:30am. Bookings essential. For booking details check out the School Holiday brochure.

For the adults, qualified Tai Chi instructor Brenda Hum will be providing two free Tai Chi sessions, one on Monday 23rd at 11.00am and again on Tuesday 24th at 11.00am. Bookings are essential for these as well.

The festive season is here once more and the Children’s and Youth Services Team have been busy spreading Christmas cheer to local primary school students with Christmas Storytelling workshops here in the library.  At the workshops students heard some wonderful Christmas-themed stories and sang a few well-known Christmas songs. They also joined in fun activities, such as tracing their hands onto green paper to add leaves to our giant Christmas tree (it’s a handsome affair) and making a shooting star ornament to take home.

“Don’t judge a book by its cover workshop” was a great success with budding young artists turning old books into works of art.

Imagination was the limit! 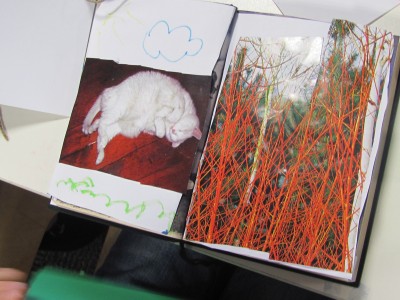 Books were redesigned with creative flair.