At this time of the year you might see the Easter Bunny greeting children and handing out chocolate eggs. Usually the character represents a confectionary company and is dressed in a soft, fluffy onesie and wearing a big rabbit head.

On page 2 and 15 of the edition dated 21 March 1967, the North East Leader, a Messenger Newspaper printed an advertising promotion for the Modbury Shopping Centre at Clovercrest. The Easter Bunny would make an appearance on the Thursday evening before Easter and hand out eggs to children. One could argue that there is nothing fluffy about this Easter Bunny, with the exception of the fur trim on her costume and the image she presents. 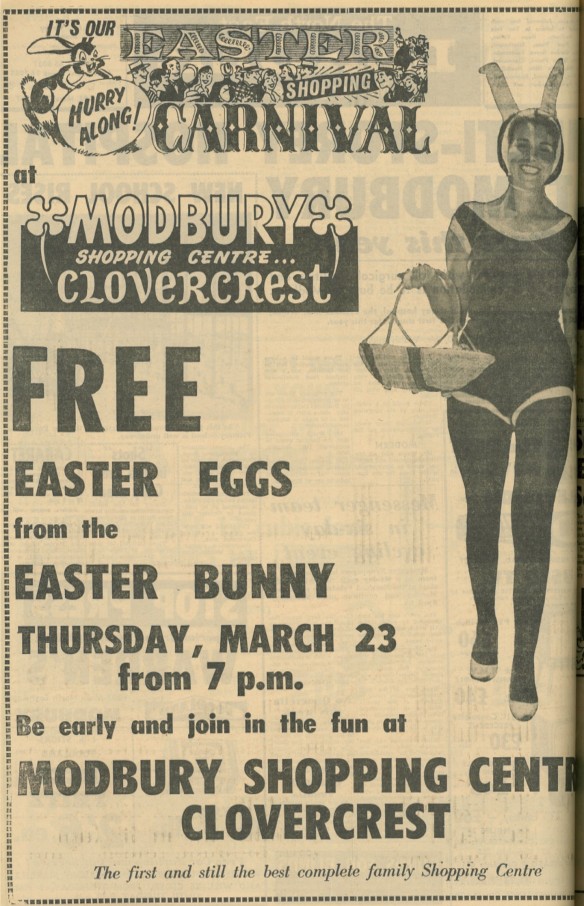 When you look at these photographs of the Clovercrest Easter Bunny you might wonder if the target audience of this Easter promotion was really children! The lady’s costume and footwear are more modest than, but reminiscent of a Playboy Bunny’s outfit. The late eccentric American billionaire Hugh Hefner created and published the pornographic men’s magazine Playboy in 1956. Playboy Bunnies worked as cocktail waitresses and croupiers in a chain of mens’ clubs and casinos across the world. Hefner’s first club opened in 1960 and he also used the Playboy Bunny logo on the front cover of Playboy. Not forgetting the Playboy Mansions where Hefner lived, surrounded by his harem of beautiful girls, his ‘Bunnies’.

In 1963 journalist and feminist Gloria Steinam ventured undercover for eleven days, securing a job as a Playboy Bunny in New York. Steinam wrote her two-part article in the form of a diary entitled A Bunny’s Tale, for the May and June issues of Show magazine. Gloria had managed to secure employment as she was physically attractive – The Clubs stated in their recruitment advertisements that ‘homely’ women need not apply. Her writing discredited the idea that working as a Playboy Bunny was glamourous and profitable. Steinam exposed the sexism of the club and the horrible conditions that Bunnies had to work under. It was mandatory for the girls to be tested for sexually transmitted infections when they took up the job. They were told whom they could date, namely the Club’s top tier members. 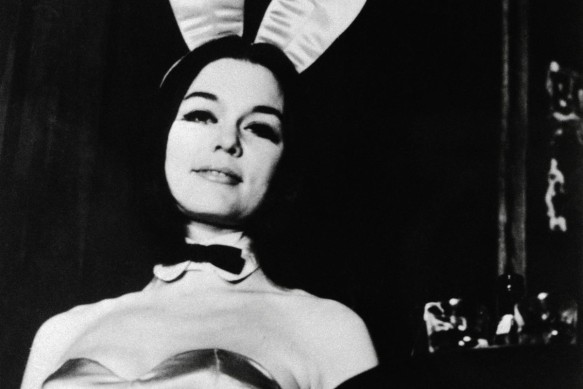 Besides being ogled and treated as sex objects, Bunnies earned low wages and were allowed only one week’s leave a year. They wore tight revealing costumes that cut into their flesh and high heels on long shifts. The Bunnies had to pay for the upkeep and cleaning of their costumes and the Clubs took a percentage of their tips.
(https://www.theguardian.com/commentisfree/2013/may/26/gloria-steinem-bunny-tale-still-relevant-today)

A Playboy Bunny working in the Miami club during the 1960s

By 1967 Hefner operated 16 clubs and two international Playboy Bunny resorts. Hefner was also honoured with a cover story in Time magazine in the edition dated 3 March 1967. The magazine proclaimed him a genius and a “prophet of pop hedonism.” (http://time.com/4515185/hugh-hefner-obituary-playboy/)

Despite Steinam’s article, business continued to flourish. Hefner had created a mainstream brand for the sophisticated man to enjoy and the Playboy Bunny had become an icon worldwide (http://time.com/4963765/no-hugh-hefner-did-not-love-women). The dumb Bunny stereotype was entrenched in popular culture. The Time article pictured a photograph of several Playboy Bunnies sunbaking and exposing their bodies. The caption read “Young, pouty types without excess intelligence.” (http://time.com/3547122/playboy-hugh-hefner-1967/)

Hugh Hefner always claimed that by publishing his magazine and inventing the concept of the Playboy Bunny that he had contributed to the sexual revolution of the 1960s. He had dismissed the prudery and taboos of the 1940s and 1950s by promoting free speech and free love and by having being open about sex and pornography.

Following Hefner’s recent death in September 2017 at age 91, the controversy still exists as to whether this statement was ever true in any way or if Hefner was simply a master businessman who had tapped into an existing market and who knew how to exploit women for profit.