In its first incarnation, the Tea Tree Gully Library was a bookmobile. The ‘Municipal Library’ began operating in June 1965. It was a bus that serviced the local community by visiting locations around the local district, Inglewood and Houghton, such as shopping centres, the Council Civic Centre, schools and the Highbury hotel. At this time, Tea Tree Gully had a population of approximately 16,000 residents scattered over an area of 55 square miles. By 1968 the population had increased to 27,000 and Tea Tree Gully had officially been declared a City. The Library’s book stock and the number of borrowers had also increased substantially, making conditions cramped inside the mobile library. Due to its age and poor mechanical condition the bus had to be retired. 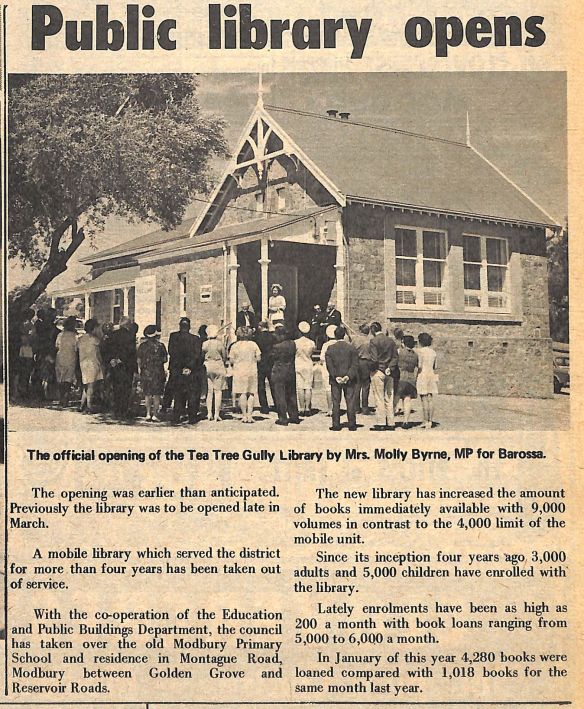 So the official opening of a new public library made front page news in the North East Leader, a Messenger newspaper on 5 March 1969. The Library was housed in the building which was formerly the Modbury Primary School and headmaster’s cottage, which is now designated as 561 Montague Road, Modbury. It was small compared with our modern library facilities but it had high ceilings, fireplaces and was of solid construction. However, I recall a former Library staff member who worked in the old building shelving books after school commenting that it was cold and that there were mice!

The North East Leader article provides us with some interesting statistics relating to the amount of book stock held by the Library, the number of loans and membership in 1969. Naturally the demand for library services has increased over time. Since 1969 the Tea Tree Gully Library has serviced the community at three other locations. The Library opened on 17 December 1975 at 1020 North East Road, Modbury, adjacent the former Civic Centre and on 28 July 1991 at 98 Smart Road, Modbury, in a joint-use agreement with the Torrens Valley Institute of TAFE. Things have changed quite a bit since the Tea Tree Gully Library moved to our current premises in the Civic Centre at 571 Montague Road in 2003.

As of September 2017 the City of Tea Tree Gully Library has approximately 118,000 items in stock, including not only books and magazines, but also many audiovisual materials which did not exist in 1969. As part of the One Card Library network we can offer our customers infinitely more choice.   On average, the Library issues 75,000 loans per month. We have 28,500 members who have borrowed in the last three years and we enroll around 266 new people per month.