Get out of gaol free!

A plan to detonate gelignite bombs inside Yatala Labour Prison, was front page news in the Leader Messenger on 7 December 1983.  The article highlighted chronic staff shortages at Yatala.  Prison officers were overworked and forced to do excessive overtime in order to maintain minimal staffing levels.  Inmates had become more violent, endangering the lives of prison officers.  There was hearsay that prisoners planned to set several fires before Christmas.

Follow up articles on page 9 largely focused on how an increase in staff numbers could solve these issues. More dramatically, the Messenger related how an inside source had revealed that chemicals had also gone missing, which prisoners could use to manufacture homemade bombs. There were allegations of a coverup, as the Prison administration and State government were aware of the potential danger. 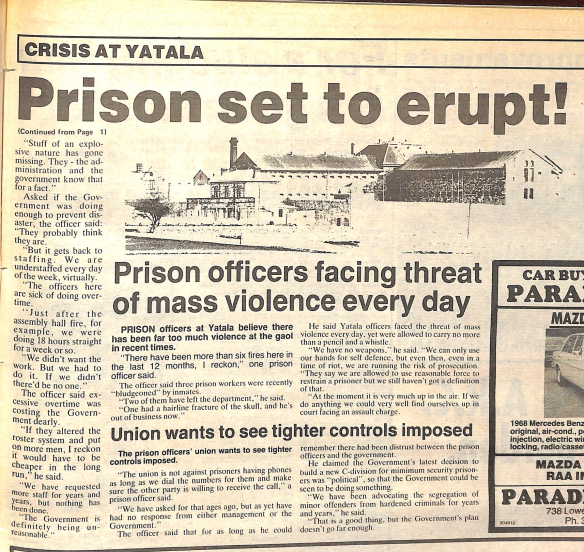 Note that the Yatala Labour Prison is still standing. So the prisoners’ evil plans to bomb the building must have been thwarted. Hopefully the Crisis at Yatala articles led to the State Government employing additional staff to ease the pressure on existing prison officers and to try and curb further violent episodes.