What was Lord Quokka thinking, recommending a film like Apollo 13?

It was a horror story of everything that could go wrong in a space mission. Yes they got back safe and sound in the end, but oh my lord!

After watching that, I’m wasn’t entirely sure I wanted to go anymore. Fortunately, I have now seen the vehicle and it is a lot less…complicated…than an Apollo capsule.

No, I will be going up using a High Altitude Balloon. This will take me up to anywhere between 25 and 38 kilometres. To put that into perspective, the highest flying commercial aircraft don’t go higher than 15 kilometres, so bare minimum, I will be 10 000m above them, even the USAF’s High Altitude Reconnaissance Aircraft, the Lockheed U2 only flies up to 21 kilometres. In fact, most likely, the only people higher than me will be the three astronauts in the International Space Station. 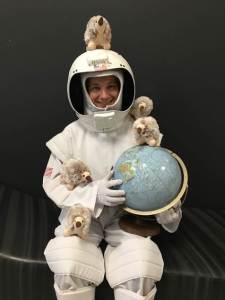 At that height I will be operating in what is known as ‘Black Space’ and able to see the curvature of the earth and even Transient Luminous Events (AKA Ionospheric Lightning or Blue Jet Phenomena). I’ve even heard that there are ELVES up there!

I’ve also heard that a special song to commemorate my flight has been recorded! I stopped in at the studio after training yesterday to have a listen. It was pretty amazing, I especially liked the line “Greatest of Monotremes“! Take that Platypus…think you’re so great with your swimming and poison sting…

I also did a photo shoot for the press today. Apparently they needed a human as well, but I was able to invite some of my friends to participate. I think the results were pretty good!