Were things really cheaper then?

On page 7 of the Messenger newspaper of 17 August 1977, Kmart advertised a General Electric blender for $42.89. It caught my eye, as many years ago my mother had bought this blender from Target and it still sits on her kitchen counter. I wondered if $42.89 would have been a lot of money in the 70s. Given that he average weekly earnings for a man  (usually the sole wage earner for a family at this time) in Australia in June 1977 ranged between $181.50 to $198.70, Australian Bureau of Statistics, http://www.abs.gov.au

Recently, I looked at buying a blender but I was surprised to discover that the average rickety looking unit costs over $100. The old G.E. blender may be noisy but at least it is solid and still works. Totally false advertising – despite its seven settings, including ‘Chop’, ‘Mix’ and ‘Aerate’, it basically has one function, which is to pulverise everything!

When we entered the cost of the blender into dollartimes.com we discovered that today you would need $174.31 to buy this appliance. No wonder Mum had to put it on layby. 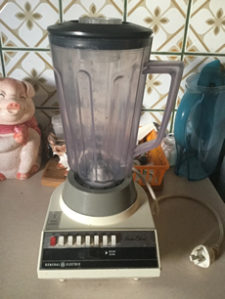