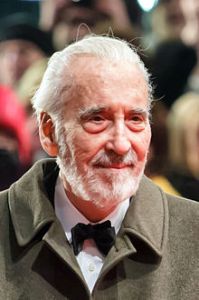 The Tea Tree Gully Library was saddened to learn of the passing of legendary actor Sir Christopher Lee this week.

Born on May 27, 1922, Lee is perhaps best known today for his roles as Count Dooku/Darth Tyrannus in the Star Wars franchise and playing Saruman the White in both the Lord of the Rings and Hobbit trilogies, but these were just a handful of the more than 270 roles Lee has played over a career spanning seven decades.

Along with Peter Cushing, Lee was a staple of British Horror Studio Hammer Films, playing roles in their productions of Frankenstein, The Mummy, Rasputin: The Mad Monk, The Hound of the Baskervilles and To The Devil a Daughter. Perhaps his most famous role however was as Count Dracula in Hammer’s The Horror of Dracula. He would go on to play the Vampire King no less than six more times for Hammer.

Related to James Bond creator Ian Fleming by marriage, Lee was Flemings choice to play the role of Doctor No in the first film adaption of Bond. Though the role eventually went to Joseph Wiseman, Lee would eventually appear in The Man With The Golden Gun, as the villainous assassin Scaramanga.

In his autobiography, Lord of Misrule, Lee considered The Wicker Man to be the best film he had made.

A lover of Heavy Metal music, Lee had recorded four albums and three EPs before his death, including A Heavy Metal Christmas and Charlemagne: By the Sword and Cross which won him the ‘Spirit of Metal’ award at the 2010 Metal Hammer Golden God awards.