Co-written with fashion journalist Ian Kelly, it is an epic read that covers Westwood’s evolution from shy primary school teacher to original founder of the London punk scene, her influence on world fashion and the rise of Vivienne Westwood the designer label.

At 400 pages, it’s no short read, but there’s lots of photos and hand-drawn illustrations to break it up. Westwood doesn’t directly author the book, instead she is frequently quoted to provide her version of events on her life’s course.

The origins of British punk fashion are covered in detail, including the moment Westwood met partner Malcolm McLaren and the story behind their infamous SEX clothing shop on King’s Road. While it was a turbulent period for their relationship, it was an intensely creative period for fashion. During these years of raising small children, running a business and making all clothes by herself, Westwood refined her fashion skills and slowly her aggressive punk designs morphed into high-end fashion. It is said her cutting skills reinvented the concept of traditional British tailoring and gave a lifeline to the British tweed industry from the 1980s onwards. 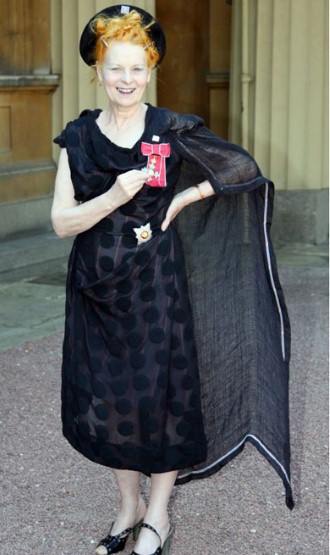 Vivienne Westwood being made a Dame at Buckingham Palace

Westwood is still heavily involved in her activism work for Greenpeace and her human rights organisation Liberty.The book criss-crosses the wide range of topics she has provided public comment on over the years – social upheavals, change of governments, the progression of the human rights movement. Those seeking gossip and scandal can lap it up from the chapters on the 1970s, the glam 1980s, the grungy 1990s and beyond. It also features contributions from many of Westwood’s friends, including the likes of Pamela Anderson, Naomi Campbell,  Prince Charles and Julian Assange.

Her marriage to Andreas Kronthaler, 25 years her junior, is also explored. A relationship that developed from a mutual admiration of one another’s fashion designs and a little bit of a ‘crush’ on one another, their 23-year marriage has gone from strength to strength and defines the Vivienne Westwood fashion label as it stands today.

If you persevere with this long book you will be left feeling inspired and totally in awe of this dynamic style maven, who at 74 continues to pump out a new collection for Paris Fashion Week each year.

You can borrow this book from our library here