Following on from Helen’s travels to Easter Island, Penny talks about an island a little closer to home.

Located just off the coast of Hervey Bay, Fraser Island is situated 350km north of Brisbane. It’s a mysterious and beautiful place. 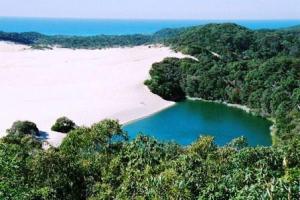 Swimming in the freshwater lakes is a memory that stands out for me. With an abundance of fresh water on the island, there are dozens of pristine mirror lakes, which are perfect for swimming in and drinking from. Lake McKenzie in particular is spectacular – it has clear blue waters and white sandy shores, and is probably the purest form of water I have ever experienced. Eli Creek was another gorgeous swimming spot.

More than 50 shipwrecks are marooned along the Fraser Island coastline. The most famous shipwreck is the Maheno, a former trans-Tasman luxury liner and a WWI hospital shop.

There are plenty of walking tracks on the island, which can take you to high vantage points overlooking the sea and the Queensland coastline, or to dense pockets of rainforest where you hardly see the sky. My favourite walking adventure was heading up the island’s giant sand dune with my boogie board and surfing all the way down again!

Given it’s made entirely of it, sand is always something to contend with on Fraser. You drive on sand, you sleep on it,  you are always walking on it and getting it in your shoes. I remember friends getting bogged in the sand even before we had boarded the barge to head over to the island. 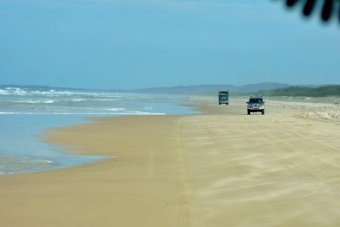 The endless beaches are really sand highways with utes going up and down all day long. We only drove places during the day, as it was too scary at night with the high tides and pitch black skies.  While the utes get lots of space on the beach, the internal sandy roads are much narrower. Once we encountered a bus on a road in the rainforest that was not wide enough for two vehicles, and we had to sit there until the coach went past, scraping our vehicle and stripping off metres of paint.

The island has very little development, so it’s easy to imagine yourself as a member of one of the aboriginal tribes who lived there for more than 5000 years, seeing and encountering the same natural beauty of the island.

The Library has a load of travel books that are either on, or include sections on Fraser Island. Trip Advisor has lots of information regarding accommodation and 4WD hire.