Anstey, the Tea Tree Gully Library’s resident echidna, would like to recommend the new children’s book ‘A Lion in Paris’, to younger readers. 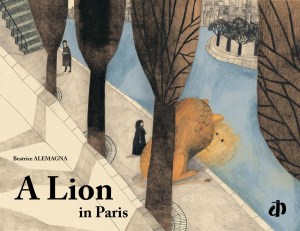 A Lion finds himself in the most unlikely of places, the grey cityscape of Paris

Written and illustrated by Beatrice Alemanga, this is a story about a lion who arrived in Paris to find a job, love and a future.

The city of light comes to life in the whimsical and layered illustrations of Beatrice Alemanga. You’ll want to jump into the book with its large format and landscape orientation and join lion on his adventures. Climb the Eiffel Tower, smile at the Mona Lisa, relax at a Cafe and join him on his journey around Paris.

With grand ambitions, the lion leaves his home on the grasslands and arrives at a busy Parisian train station. It’s here we join the lion on his journey around Paris as he discovers the excitement and strangeness of the big city. Life in the city takes some adjusting to – while it’s nice that people aren’t scared of him, the lion isn’t used to being just part of the crowd. Yet Paris just might end up being the place to call home.

‘A Lion in Paris’ is recommended for 4-5 year olds, but both the young and young at heart will delight in this quirky tale.  It is a mesmerising story, all the more enhanced by Alemanga’s unusual artistic and retro style illustrations.