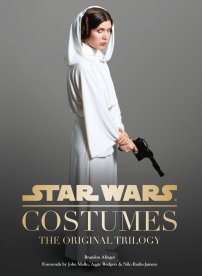 There’s no denying the popularity of Star Wars is still climbing. Now with Disney at the helm, a new film on the way, a new TV show recently launched, and a company that is no stranger to merchandising , there’s been a steady trickle of high quality, new Star Wars books coming into the Library.

A jacket that caused years of controversy for fans. It looked blue in many scenes on screen, but was actually brown.

The latest to cross my desk is this one; Star Wars Costumes – the original trilogy. No doubt designed to re-capture the delight of the original fan, who is well into middle age by now, in preparation for the big things coming in 2015. The book contains many never before seen photos of costumes from the original trilogy, up close and personal with some parts and you can really see the details, or lack of detail in some parts and many of the background character outfits.

Did you know there was so many different pilot helmets?

With Episode Seven due out in December next year, I think we’re just seeing the beginning of a new wave of SW non-fiction, stories, graphic novels and all sorts coming into the library. You can check out on our catalogue the huge range of Star Wars stuff we already keep!