Festival falls on the first week of the school holidays and we have Phil Cummings ready to read some of his stories to children as a Dad’s Read event. On Wednesday 9 July between 5-6pm children can come dressed in their PJ’s for a bedtime read. This is a free family event and no bookings are required so come to the warm welcoming environment of the library and give the kids an opportunity to meet one of their favourite authors. An adult must accompany all children. 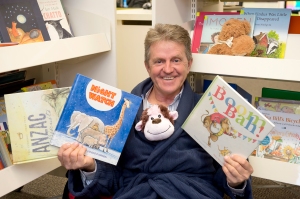 written over sixty books for children in a career that has spanned over 25 years. He is an ambassador to the Premier’s Reading Challenge in South Australia, for the Dad’s Read campaign with the State Library and was an ambassador for the National Year of Reading in 2012. Phil has received a number of honours and awards in Australia and overseas for his work. In 2008 his novel Danny Allen was here, a book based on Phil’s childhood memories of growing up in a small country town, was shortlisted for the prestigious children’s literature awards at the Adelaide Festival of Arts.

Phil’s bestselling book ANZAC Biscuits was published by Scholastic in March 2013 and has been shortlisted for the Western Australian Young Book Readers Awards and has been named a Notable Book by the Children’s Book Council of Australia. This work also received the honour of having a spread chosen from the book by the Australian Publishers Association and Books Illustrated for display at the international book fair in Bologna in March. The book has also been chosen by the SA Festival of Music to be the basis for a new commissioned work to commemorate the Gallipoli centenary in 2015. 2013 also saw the publication of the picture book Night Watch with Working Title Press and publisher Jane Covernton who published Phil’s first book Goodness Gracious! with Omnibus Books back in 1989! Night Watch was shortlisted for the 2013 Australian Speech Pathology Children’s Book Awards.

Phil’s books ANZAC Biscuits, Boom Bah! and Night Watch were presented to the Duke and Duchess of Cambridge as a gift to their son Prince George to commemorate his visit to Australia in 2014.

Dads Read is an early childhood literacy initiative, developed by State Library of Queensland in 2010 and launched statewide in 2012 as part of the National Year of Reading, to promote family literacy.

For more information on our Reader’s Festival or school holiday events go to our website.