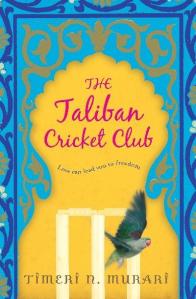 I don’t really like cricket. So why would I read a novel entitled The Taliban Cricket Club? Well as the saying goes ‘it’s just not cricket!’

Rukhsana is in a bad situation. She lives with her brother and mother in the Islamist Emirate of Afganistan, ruled by the evil Taliban, who use religion as a front for their brutal regime. Rukhsana and other Afghanis live in constant fear of execution, imprisonment or beatings with electrical cables. Her father and grandparents were killed when their vehicle ran over a landmine. And her mother is dying of cancer.

No longer able to work as a journalist, because according to the Taliban “Women should be seen in the home and in the grave” things become much worse for Rukhsana when Zorak Wahidi, the Ministry for the Propagation of Virtue and Prevention of Vice, decides he will marry her. Marrying Wahidi is unthinkable. It would lead to a life of servitude and cruelty. Refusal of his order would mean death, and her younger brother Jahan would be sent to the infamous Pul-e-Charkhi prison where he would be tortured and raped.

Unexpectedly, the Government announce the initiative that men can compete for selection in a national cricket team, which will be sent to Pakistan to receive further training and represent their country internationally. As one of the few people in Afghanistan who knows how to play cricket, Rukhsana views the competition as an unmissable opportunity to train her brother and cousins so they escape from Afghanistan. In the mean time she must anxiously wait for her betrothed to send her money and papers from overseas so she can employ the services of a people smuggler.

At times The Taliban Cricket Club I felt like I was reading a true story, rather than a novel. Murari’s portrayal of life under the Taliban is realistic and scary. The novel is filled with tension, drama and twists in the plot. This book will give you a greater understanding of how desperate people can fall prey to the people smuggling racket and you cannot but help feel empathy for them. Driven by their circumstances, the characters believe that people smugglers are the only way to help them escape Afganistan and find a new life elsewhere. Rukhsana’s cousins are elated to discover that cricket is played in Australia and one of them naively comments “Then they will be happy to have us”.

There are also humorous elements to the story, such as Rukhsana’s reminiscence of how she and her grandmother learned to walk wearing the burka or references to her disguise as a young man.

Some aspects of Murari’s characterisation seem romanticised. For example, Rukhsana is not only good looking, but also intelligent, daring and devoted to her family. Rukhsana’s love interest is a handsome Indian who leads a life of adventure as a wildlife documentary filmmaker. Note that the author is also Indian.

Overall The Taliban Cricket Club is a good read. You will learn a lot about Afghani social customs and even about how to play cricket!

Enquire about The Taliban Cricket Club next time you visit the library, or click the link to place a hold now.