The Gully Winds Choir sang some songs that were special to them, including one written by Choir leader Vonda about Aboriginal soldiers who had gone to war for Australia, even before they were considered citizens. 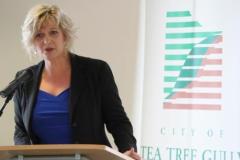 Part of the event was dedicated to the launch of the Aboriginal Oral Histories, a project undertaken by David and Gully Winds members aimed at addressing the matter of Identity, a topic that is lacking from the records of the local area. Several members provided their oral history of their lives, and lives of their families from the region.

Thanks to all who were involved, and special thanks to those who quite openly recorded their lives for the rest of us to gain an understanding of what Identity means to them. The Oral Histories are available to borrow on CD and soon will be available to hear direct from the Library catalogue.