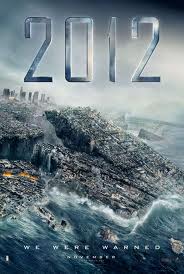 We’ve probably all heard about the doomsday prophecies, but what does it mean really?

On the  Mesoamerican Long Count calendar, some times refered to as the Mayan Calendar, the date is the end of a 5125 year cycle. According to professional Mayanist scholars, the idea that the calendar actually ends on that date is a misrepresentation. The calendar, which employs a combination of Base 20 and Base 18 numerical systems counts the passage of time as follows:

Well, in the Mayan creation account recorded in the  Popol Vuh, we currently live in ‘the Fourth World’. The preceding Third World ended with the close of the 13th b’ak’tun, giving rise the belief that the Fourth World will also end at that point.

Why not check out some of the books and films on the subject? You might also like to jump over to the Library’s Facebook page and cast your vote on what you think might happen on 21/12/2012.