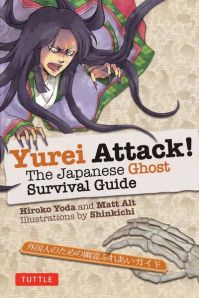 A couple of years ago we mentioned a cute little book that had joined the collection called Yokai Attack! That book was followed up by Ninja Attack! and recently,  by another equally quirky and amusing little book, Yurei Attack!

Yurei Attack! The Japanese Ghost Survival Guide is a ‘complete guide to the afterlife – Japan style!’ Japanese ghosts are similar in some ways to those of Western belief: haunting places, roaming around and generally being a nuisance, however the Japanese believe that Yurei are driven by uncontrollably powerful emotions of rage, sadness, devotion and revenge!  Hiroko Yoda and Matt Alt joined forces once more to talk about 39 of the most frightening Yurei as well as occult games, haunted spots and a tour of the underworld.