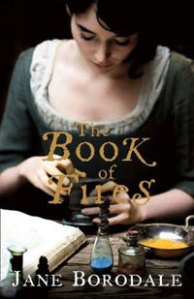 The Book of Fires

Set in 1752, The Book of Fires is the first novel by Jane Borodale. Seventeen year old Agnes Trussel is the daughter of an impoverished farming family. She runs away in fear and shame to London, pregnant and believing that she will be convicted for thievery. By sheer chance, Agnes is fortunate enough to find work in the house of John Blacklock, a brooding man, who is a fire-work maker.
She shows a talent for the craft and becomes his assistant. However, disaster seems imminent with her advancing pregnancy.

The novel is told from Agnes’s perspective and she describes her surroundings with the language of somebody who is a painter.

The Book of Fires is also about the social conditions in 18th century England and in particular, the status of women at this time. Agnes is appalled by the poverty and squalor she encounters in London, in contrast with her home in rural Sussex.

The Reader comes to realise that Agnes is naïve about many things. From a modern perspective Agnes’ unwarranted guilt about how she came to be expecting a baby is interesting. The fate of Lettice Talbot, a high-class prostitute who tries to befriend Agnes, is moving and demonstrates the hypocrisy of the era. When Agnes confides in Lettice that she is thinking of turning herself into the police Lettice dissuades her “At best you would be transported at His Majesty’s pleasure to some barren hell-hole two months’ voyage over the high seas”. I think we know where that is!

It’s obvious that the author has done a lot of research about the history of pyrotechnics as the descriptions of firework making were fascinating. Jane Borodale weaves into her story the experiments which lead to the discovery of coloured fireworks.

I really wanted to finish this book and find out what happened to Agnes. The Book of Fires gives the reader a lot to think about after you have finished the final chapter. The author also suggests some questions for use by book discussion groups.