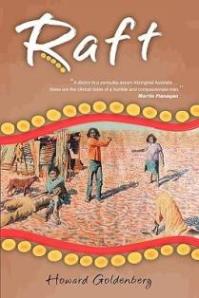 Dr Howard Goldenberg, a white older Australian and a practicing Jew has spent numerous periods working as a relieving doctor for Aboriginal communities in remote places and inside an outback prison.

In Raft he records some of his experiences and dealings with patients. The Australian newspaper has described Howard Goldenberg as presenting us with the human face of Aboriginal Australia.

You cannot read Raft without feeling compassion and empathy for Aboriginal people.

The title of his book alludes to an artwork by Ron Moss which shows Aboriginal people marooned in a landscape.

Howard presents us with numerous stories of despair that describe the shameful state of Aboriginal health in outback communities. However, there are also stories that inspire hope. Others are humorous, such as Howard’s quest to find a didgeridoo for his cousin in Argentina, related in ‘Un Didge Authentico’.

I also realised that some of the issues facing Aboriginal Australians in remote areas such as the abuse of alcohol and drugs, are the same problems that we are seeing reported in the media of late in our cities.

What comes through in Raft is Howard’s genuine care concern for all his patients as a doctor, no matter what their background or failings and his efforts to help people to the best of his ability. He is also realistic when he writes that there are no simple solutions to helping underfed, unwell, Aboriginal communities living in poverty.

Howard’s love for the Australian landscape is evident. He also reflects on his Jewish identity and the similarities he feels with Aboriginal Australians; a spiritual attachment to ancestral land that defines a people, the bonds of an extended family, exile from your homeland and persecution for what you are. Howard’s writing can perhaps be overly poetic but I certainly learned a lot about Aboriginal culture, the distribution of different groups of Aboriginal peoples throughout Australia and that they are true survivors.