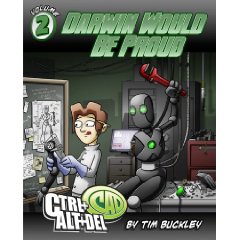 Now most World of Warcraft gamers are probably well versed in the myriad of interweb memes and webcomics out there,  but recently the ongoing series CTRL+ALT+DELETE internet comic has been released as a series of Graphic Novels. Started in 2002 this comic follows the lives of a small group of Online Gaming addicts, whose very being revolves around gaming, to the point where the lines between online life and RL (that’s gamer talk for Real Life I’m told) become a little blurry. The library has started collecting the series, but if you want to see the latest strip go to the original website here, where a new strip is published every Monday, Wednesday and Friday.