Matthew Reilly at his writing station

Australian action adventure writer Matthew Reilly has made quite a name for himself blasting onto the scene in 1996 with a self-published book called Contest.  His big break came in 1998 with the release of Ice Station, published by Pan MacMillan under the name ‘Matt Reilly’ the first novel featuring the recurring Shane Schofield character. This was followed in 1999 by Temple, and continued with about one novel per year culminating with the release of his latest and tenth action thriller, The Five Greatest Warriors this year.  Most of his novels feature military personnel, chock full of action, and to his own admittance, somewhat lacking in character development. He’s even said ‘Now, I know what you’re thinking: Matthew Reilly books aren’t exactly known for their character development… the characters in my books don’t live long enough to warrant any development.’ 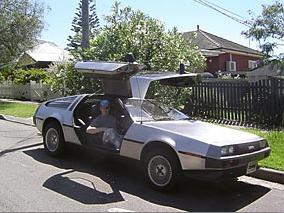 Matthew Reilly in his DeLorean

Matthew is also a self-confessed geek, collecting all sorts of pop culture and science fiction collectables and memorabilia. He evens owns a DeLorean DMC12 just like the time machine in Back to the Future.