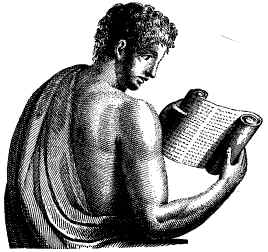 My recent posts regarding the oldest and largest libraries resulted in some questions from blog readers so I thought I’d try to answer a few of them. Lisa asked “who was the first librarian in recorded history?” The earliest recorded names of librarians come from the superintendents of the Library of Alexandria, the largest and most famous library of the Egyptian era, the first of which was Zenodotus of Ephesus. Zenodotus served from 284BC until 260BC and was also an avid and skilled writer. He is credited with the first critical volumes of Homer’s Iliad and Odyssey, editing Homer’s works from various manuscripts. He was replaced as super of the Library of Alexandria in 260BC by Callimachus of Cyrene.